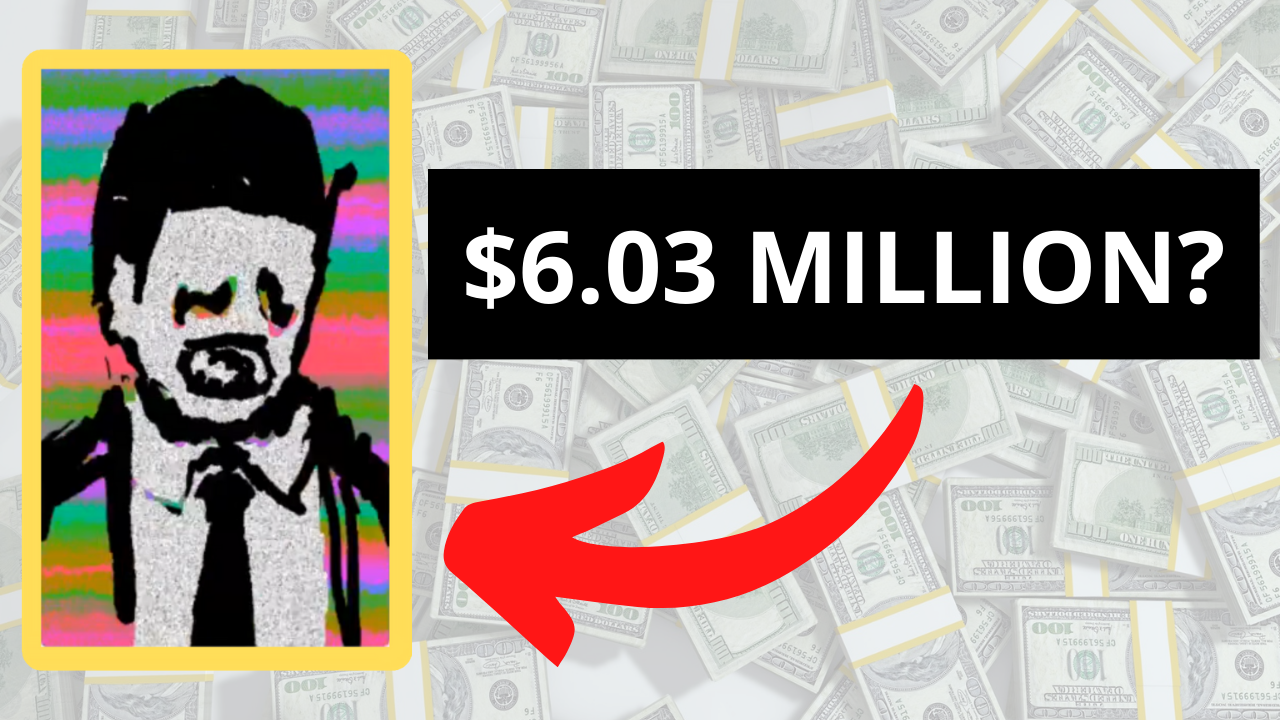 So, in 2021 the NFT space became the most prolific sector of blockchain, topping $40 billion volume in transactions. And this year, experts believed that the NFT market would be more explosive, as NFTs are selling at ridiculous prices, and we made a list. Before everything else, here’s a disclaimer.

Also, at the end of this article, you’ll discover an NFT that never looked like a typical digital art but still broke the charts as the most expensive NFT sold. Then, enough words, let’s dive in.

#10 A Coin for the Ferryman

A Coin for the Ferryman, an NFT created by XCopy, which had been originally bought for $139 in 2018. However, three years later, the same NFT would be sold for $6 million, almost 45 thousand times its previous price

Crossroads was a phenomenal surreal digital art made to an NFT and was created by a world-renown artist Mike Winkelmann, aka. Beeple. The photo portrayed the artist’s sentiment toward the 2020 US Presidential election in the form of a 10 seconds video. This quite controversial NFT had actually sold for $6.6 million to an anonymous buyer.

This one NFT project had literally blown up the NFT space. Being one of the first NFT Projects in Ethereum Blockchain, many of the CryptoPunk first NFT owners were clueless about what would happen next. It was until CryptoPunk #7804, which depicts a blue alien with a hat and a pipe, was sold for $7.6 million.

Talking about the same NFT project, just a day after CryptoPunk #7804 was sold, another ‘blue alien with a blue sporting headband instead,’ the CryptoPunk #3100 has also been sold for $7.67 million..

The third-rarest in the CryptoPunk series, that even got in the famous auction house Sotheby’s, CryptoPunk #7523. Yes, it’s another ‘blue alien,’ but it was the only one that had a mask in the entire collection. Don’t be surprised, as the final auction price actually reached $11.75 million.

CryptoPunk #5822, this fore sure was the most expensive CryptoPunk NFT sold ever. And since this project had started, it had more than $9 billion in trading volume transacted. But again, CryptoPunk #5822 was another blue alien wearing a blue bandana and was sold for $23 million.

HUMAN ONE, a masterpiece NFT described as a”generative work of art which seamlessly evolve creatively over the course of its artist lifetime”. This NFT showed another side of Beeple’s unique creativity and his way of conveying his message. His art portrays different emotions about how we humans would possibly be in future. This NFT got sold for $28.9 million.

Clock, this NFT had counted down the days since Assange, founder of Wikileaks, had been imprisoned. So, Pak, a renowned artist, created this NFT to fund their legal defence of Assange. Later on, a group of people pooled their money and bought the NFT with a price tag of $52.7 million.

The First 5000 Days, this was another Beeple’s NFT creation and the most expensive NFT ever sold to a sole owner. It was made of a collage of Beeple’s artworks he made every day for 5000 days straight. This digital jpeg had an image size of 21,069 × 21,069 pixels, so you could actually zoom in on each individual high res artwork on that collage. And this NFT was purchased for $69.3 million.

The Merge, so even Beeple himself considered the creator of this NFT as his mentor. Undoubtedly, Pak was viewed by many as a godly artist in the NFT space. Though this particular NFT that he created never looked like typical digital art, as it was just a sphere. Still, many NFT enthusiasts considered it a “Code on art.” Eventually, it became the most expensive NFT with multiple owners, as around 30,000 people bought the only NFT that could actually merge together.

This website uses cookies to improve your experience while you navigate through the website. Out of these, the cookies that are categorized as necessary are stored on your browser as they are essential for the working of basic functionalities of the website. We also use third-party cookies that help us analyze and understand how you use this website. These cookies will be stored in your browser only with your consent. You also have the option to opt-out of these cookies. But opting out of some of these cookies may affect your browsing experience.
Necessary Always Enabled
Necessary cookies are absolutely essential for the website to function properly. These cookies ensure basic functionalities and security features of the website, anonymously.
Functional
Functional cookies help to perform certain functionalities like sharing the content of the website on social media platforms, collect feedbacks, and other third-party features.
Performance
Performance cookies are used to understand and analyze the key performance indexes of the website which helps in delivering a better user experience for the visitors.
Analytics
Analytical cookies are used to understand how visitors interact with the website. These cookies help provide information on metrics the number of visitors, bounce rate, traffic source, etc.
Advertisement
Advertisement cookies are used to provide visitors with relevant ads and marketing campaigns. These cookies track visitors across websites and collect information to provide customized ads.
Others
Other uncategorized cookies are those that are being analyzed and have not been classified into a category as yet.
SAVE & ACCEPT